Atavars
Ruminant-headed folk, atavars are hostile to civilization and all who support it, often doing unto errant humans that which humans might do unto livestock! Those who pay proper respect to the wilderness and to the atavars themselves though might then just be ignored (a 50% chance), unless of course they are hungry or looking for some new (human) pets. Whatever the case, the use of soap, extra garb, and polite conversation is not recommended when venturing into atavar lands, unless that is, the travelers are looking for a fight! 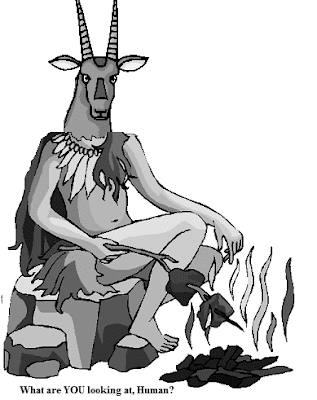 Usually found in the deep forests, these deer-headed folk enjoy turning the tables on those who would make way for civilized lands or other abuses of the woods. Many an unfortunate huntsman, trapper, or logger has found his head mounted upon the sylvan walls of a cervine atavar’s home. After dining on his carcass, it is said that the atavar might remark that the human was a bit ‘gamey’.

These goat-headed people are fond of hills and mountainous areas, but not very fond of those who lack barbarity. As a result, hircine atavars will likely attack any civilized-seeming intruders in order to subdue, shear, or even challenge them to a head butting competition. Such an encounter will likely be fatal, and most certainly, gruff.

Often found in deserted fields, these cattle-heads may appear similar to minotaurs (to which they are related), but they are man-sized and are more concerned with violating civilization than with roaming labyrinths.  Those unfortunate enough to meet a bovine atavar and then act in any way that borders on high society will face goring and the terrible experience of being cut into steaks or even milked! In any case, such victims are asked to not ‘have a cow’, whether they survive the ordeal or not.

Arcadian: head, legs, and lower torso are animalistic; upper torso, arms, and hands look human. These are the default type of atavars encountered.

Antediluvian: animalistic and quite furry all over: essentially a very feral animal that walks upright with longer hind legs and humanoid hands. Grant them +3 extra hit points per HD, as well as the ability to make an extra a bite or claw attack for 1d4 damage each round, but also take away their ability to use weapons and act in anything resembling a polite manner.

Minoan: only the head is that of an animal- the rest of the atavar’s body appears human. Unlike other types, Minoan atavars are quite intelligent and even refined in their own manner, but not as strong or as tough. Reduce their HD by 1, but also give them the ability to speak Common, as well as act as a 1d6 level cleric, shaman2, or druid2 of one of the following divinities (roll1d6):