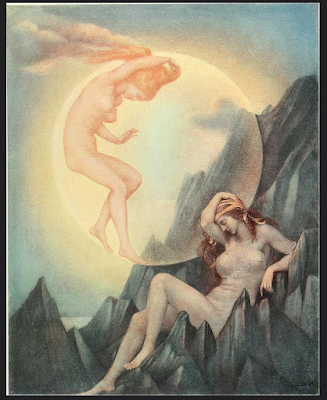 Divine Tests
Ninhursag’s mighty mountains might bring succor, but they can also bring challenge too.

1-4. Growth and decline continue unabated in the world, affecting the cleric greatly. She takes a -1d4 penalty to all rolls, but they can be eliminated by 1 for every hour she spends in quiet reflection.

5-9. Enki fathers many, though Ninhursag must see to their care. The cleric loses access to some of her spells (50% chance for each one) including possibly her turn ability. Roll 1d6 for each spell lost to determine who or what she will need care for in order to be able to use it again. Each task will take at least 2d6 turns:
[1] Plants, whether wild or cultivated, or the people who cultivate them, as did Ninsar
[2] Pastures and/or pastoral people, as did Ninkurra
[3] A river, other source of fresh water, or those who weave, as did Uttu
[4] Mothers and children, or even the earth and soil itself, as is Ki
[5] A man, by lying with him- chance of conception is 25%, as she did with Enki
[6] A sick man, as she did for Enki, absorbing his sickness into her (treat as automatically experiencing double healing from magical side-effect #2: Birth Pains if she uses any curative magic on him)

10-13. The cleric becomes more mountainous and fertile, like great Ninhursag herself. Roll 1d4.
[1] Large: she gains 1’ in height permanently, along with 1 STR and 1 HD, though she will find it harder to fit into certain areas, garments, manipulate smaller objects, etc., generally suffering a -2 in those cases.
[2] Buxom: she now has a larger bosom, along with gaining 1 CHA, but she now also experiences the Mountain Mother magical side-effect for result #5 along with #3, rather than Standard Magic.
[3] Fertile One: she becomes pregnant, giving birth in just nine days without any labor, and the child grows to adulthood in just 9 days too.
[4] Mountain Lady: she grows hale, gaining 1 CON along with a +1 to all rolls related to resisting mountain perils (falling, cold, predators, etc.), but also a -2 to all rolls when in an urban environment.

14-17. The plant-induced sickness of Enki overcomes the cleric now. Until a fox shows up (a base 10% chance per hour), she will be unable to function. Once it does, she can then be cured of the disease, either by herself or another, though magic will still be needed. Afterwards, she gains a +2 bonus to all rolls related to the god or goddess that Ninhursag had given birth to in her own experience.  Roll 1d8 to see which one it is:
[1] Abu: plants & growth
[2] Nintulla: copper, gold, & silver
[3] Ninsitu: healing & being a consort
[4] Ninkasi: beer
[5] Nanshe: justice & divination
[6] Azimua: healing & the underworld
[7] Emshag: cleanliness, brightness, & fertility
[8] Ninti: ribs & giving life

18+ Though Enki might challenge her, Ninhursag must fashion the clay and give it purpose. The cleric is so tested, suffering a -9 to all her rolls as her mortal form is twisted for the next 24 hours. Add an additional day per divine test total over 17. Afterwards, if she survives, her form will revert to normal and any children she later has will gain a +1 bonus to an ability score of her choice- all thanks to her better understanding of the clay.