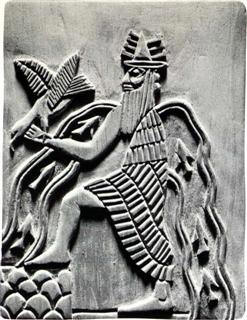 We begin a new series on ways to incorporate the followers of various gods and goddesses from the upcoming Divinities and Cults: Volume III into your campaign.  Here is Enki, Mesopotamian god of deep water, magic, fertility, & creation.

Enki Encounters
Roll 1d12
1. The party stumbles across an abzu (area of deep water). 1d8 followers of Enki are sure to be present or arrive within 1d20 rounds (equal chance of each). They are 75% likely to be cheerful too.

2. A cleric of Enki takes an interest in a fertile female character. He will either (roll 1d4): [1] attempt to charm her at his earliest opportunity, [2] cast a life missile at her in order to conceive his next child,
[3] prepare her to be a concubine of his god, [4] all of the above

3. A follower of Enki has become quite intoxicated and starts giving away valuable items. Will the party accept them or put a stop to it? Whatever happens, he has a base 50% chance of remembering the following day and will seek to get them back.

4. A fisherman works at an especially fertile pond. He will assist the party in any way he can, also having a base 5% chance of actually being an Avatar of Enki.

5. The party keeps encountering dead sailors and river men. They may wish to uncover the reason why they seem to turn up everywhere. To do so, they will have to confer with one of the following to help find the answer (roll 1d3):  [1] a wise duck, [2] a sweet witch, [3] a dour cleric of Enki with 1d4 ex-wives

6. A random party member has apparently sinned against Enki and now has an albatross hung around his or her neck. All the others are then diced off for (saving vs. death) or apparently die. The situation lasts until the one with the albatross shows a great appreciation of water life (per Referee).

7. Stranded with two beautiful women, a captain, a mate, an older married couple, and an inventive priest of Enki, the party must uncover a way to escape, balancing the priest’s love for water with his love for civilization.

8. A number of robberies have been occurring lately with the perpetrators being masked like former leaders of the land. The party may uncover that it is actually a group of Enki worshipping swimmers who mean well by what they’ve been doing, but have begun to become increasingly violent, crossed the line, and have to go down.

9. The area quickly becomes flooded. It is most likely water, though there’s a 10% chance of it being another type of life fluid.

10. The party stumbles upon a cleric of Enki who is hard at work. He is building a massive reed arc. If questioned, he claims that Enki told him a massive flood is coming and needs help stocking it. There’s a 50% chance that he insists one lucky party member needs to board it too in order to preserve their genetic stock for future generations.

11. A debate (i.e. argument) between a follower of Enki and a follower of Poseidon is ensuing over whether fresh or salt water is better. The party just might be foolish enough to get in the middle of it. No matter what they choose to do, things will likely turn brackish.

12. In a strange twist of happenstance, the party encounters a mystic of Enki in the process of fathering a child with a very mountainous woman. Each member will be overwhelmed with a feeling of (roll 1d4): [1] peaceful serenity, [2] universal insight, [3] embarrassment, or [4] attraction to the woman the mystic is with