Clerics of Sif, Part I 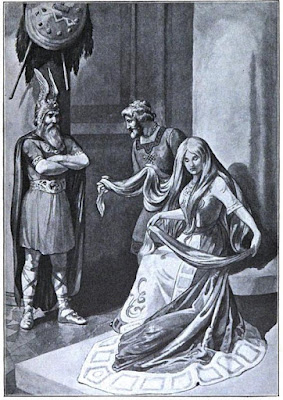 Tenets of Sif
* Be a good wife, putting your husband and family first
* See to the earth’s bounty, fighting to protect it and yours if need be
* Show off your beautiful, blond locks

Clerics of Sif
Special: Sif is served by female clerics and priestesses who are always fair-haired.
Allowed Weapons: Longsword, spear, axe
Allowed Armor: Chainmail or lighter
Holy Symbol: Sheaf of Grain, Lock of Blond Hair, Upturned Sword
Can Turn: Thieves, Barbers
Mysteries of Sif: Up to once per day per level, a cleric of Sif can immediately cast one of her spells on a target that she hits with her sword.

Magical Side-Effects
The magic of Sif can be light and loving, though it may require the harvest scythe too. Roll 1d12.

1. To Reap and Sow: It is time for what has been given to be returned. Either the spell’s recipient (if beneficial) or the cleric (if not) takes 1d4 damage, though 1d6 inches of blond hair or 1d6 sheaves of grain would count instead.

2. For Bounty’s Sake: The spell’s target must have taken care of his or her spouse, family, and/or land within the last 24 hours, otherwise he or she may only receive harm from the spell.

3. Loki-Shorn: It seems that the Trickster has crept in, robbing the cleric and leaving her nearly bald! She suffers a -6 penalty to all her charisma-related rolls until her hair grows back the next day.

4. Amber Waves: The cleric must be in a field or have at least two other blondes nearby. If not, then the spell only has 50% of its usual effect.

5. Fair Place: A 120’ radius from where the spell is cast becomes blessed by Sif, bestowing to all who are there a +3 bonus to saves when it is touched by sunlight.

9. In Loving Fields: The cleric must be with her husband and/or stroll nude around fields for 1d6 minutes at her earliest opportunity, though the spell gains a 50% bonus to its effect, range, or duration right away.

10. Virtue Wife: If she is married and has remained faithful, then the cleric’s magic works with 50% extra effect, range, or duration.

11. Sword Maiden’s Cry: As long as the cleric holds her sword aloft and yells (making it very obvious to all that she has cast the spell), then it works for double its normal effect, range, or duration.

12. The One with Golden Hair: Thanks to the grace of Sif, the cleric’s hair grows more shimmering bright, permitting the spell to have double its effect, range or duration, as well as it not being expended that day. In addition, it grants her a +2 bonus to all charisma-related rolls for the next 1d6 hours thanks to its radiance.