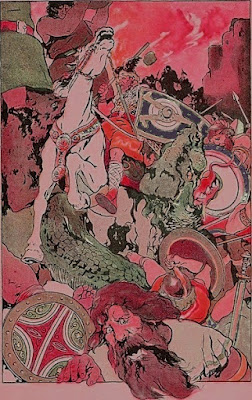 Divine Tests (Surtr)
The doom of fire and darkness will someday consume the world and even the gods. Until then, Surtr will offer a taste.

1-3. Do you smell smoke? A random object catches fire, destroying it, causing 1d4 damage to any adjacent per round of contact, and even possibly spreading if flammables are nearby. Roll 1d4 again to see what it is:
[1] one of the cleric’s garments, [2] an item on the cleric’s person, [3] an object adjacent to the cleric, [4] an item or object in a random direction of the cleric, up to 1d4 x 5’ away.

4-8. Surtr likes to burn things! His cleric loses access to some of his spells (50% chance for each one) including possibly his turn ability until he does so too. Roll 1d4 for each one lost to see what he must do to recover it.
[1] Extinguish a light, whether by ruining someone’s hopes, corrupting a bloodline, or blackening the sky for most of the day.
[2] Spread fire. Burning down a structure or immolating others will do, preferably both at the same time.
[3] Assist Fire Giants or similar folk for at least 1 hour. They are good at burning things.
[4] Slay a follower of Freyr or similar fertility deity while laughing maniacally.

9-14. When Ragnarok comes, the cleric must be ready. In preparation for this, Surtr changes him forever and, if not so empowered before, grants him immunity to damage from fire but also double damage from cold from now on. Roll 1d5.
[1] Hair Aflame: Though they likely are red already, the cleric’s hair and beard ignite and never stop burning. What is more, he can now also sense the presence of fire within 1/4 mile at will and will himself always have an easy way of starting more.
[2] Scathe of Branches: Like a true, elemental Jotun, the cleric radiates intense heat, causing 1d4 fire damage to all who are adjacent to him. If he happens to experience this particular test result twice, then his body actually appears to be on fire and the damage extends to all within 10’ of him, burning trees and anyone or anything that’s close enough.
[3] Dark One: Though not all fire giants have blackened skin- the followers of Surtr’s consort Sinmara are notably pale- his faithful certainly aspire to a countenance of jet. The cleric is so changed, permanently emitting the fear effects of a Blackening Spell (Magical Side Effect #9) while also clearly marking him as an agent of evil.
[4] Forged of Iron: The cleric becomes further hardened, being able to ignore up to 4 damage per round, though he also becomes 10’ slower as he can only now lumber forth.
[5] Burning Eyes: Surtr’s fire lights within the cleric’s eyes now, unnerving those who meet his gaze. Up to one of the cleric’s foes per round must save vs. death or suffer a -4 to all rolls until they look away.

15-16. Now the cleric becomes addicted to Surtr’s flames. Whenever he encounters a new item, structure, or individual, he must save vs. death to resist attempting to ignite it, even if doing so would go against his long-term plans. What is more, for every time he experiences this test, the save becomes 3 harder. This is what happens when one plays too much with fire.

17+ Someday, the sons of Muspel will ride forth and break Bifrost bridge asunder. Until then, there is a mighty explosion, pouring forth deadly heat, smoke, liquid stone, and flame from Surtr’s fiery realm! All within a 120’ radius of the cleric have 2d4 rounds to escape or take 6d6 damage per round in the inferno (even those who would otherwise be immune to fire still take 1/2 damage). What is more, for every divine test result over 17, increase the radius by 60’ but not the time to escape.