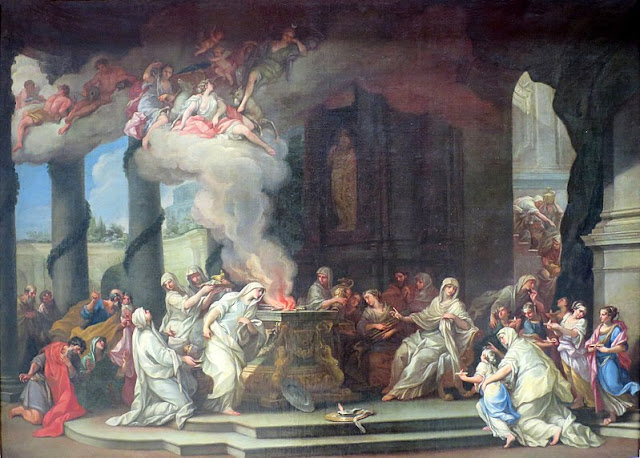 The pure may have just more in store. Find out for sure with these ways of Vesta that endure.

2. The presence of Vesta is felt strongly now. A random person in the immediate area must save vs. death or go chaste. Though they may wish to remain this way, others may wish to cure them (via removing it as a curse), especially if they themselves follow divinities of love, nature, or fertility, or simply want them for themselves.

3. A condemned man has been set free just for having the luck to run into a priestess of Vesta on his way to the gallows. As for the grave crime he was accused of, he is actually (roll 1d3): [1] completely innocent, [2] somewhat guilty, [3] fully guilty! In any case, the party will likely be hired by those who wish to see that his luck finally runs out.

4.  A communal hearth is under construction here, overseen by 2d4 legionaries and 1d3 faithful ladies of Vesta (see #1 above). They ask the party’s assistance in guarding it for a time from a rampaging manticore that’s been spotted in the area.

5. All fires within 360’ go out. Only a faithful follower of Vesta can relight them and only if those so affected agree to remain chaste or at least dutifully devoted to family life.

6. Seemingly out of nowhere, 1d3 vestal virgins arrive to tend to any of the party’s wounds. Though they may not be that skilled (they only have a basic medical training), their CHA scores of 14 +1d4 certainly helps, especially for their male patients.

7. The party comes upon 1d4 villagers who follow a profession- see Volume II for a generation table. Vesta would hope that it’s something respectable, but they only have a base 50% chance of being so!

9. Could you grab some supplies? The next person to do so will also find the notable presence of penates- Roman household spirits- there. Depending on how chaste or devoted to family life the mortal is, they will either grant him or her +1 to all rolls until the next day or a -1 penalty if they are especially lewd and unfamiliar instead.

10. Vestalia is being celebrated here, with barefoot women coming to ask the goddess to bless their households and families. All who do so have a base 50% chance of gaining a +1 bonus to such domestic rolls for the next 1d4 months if they perform the rituals especially well. Donkeys are also welcome here, but not those who behave like asses.

11. Seeing a light atop shaped in the manner of that which they seek, the party comes upon one Temple Arsenic. Filled with 4d12 attractive women dressed in white (see #1 above), it’s been a long time since they’ve had visitors, especially male ones, and there’s only one punishment for them for showing off such a misleading beacon.

12. A woman in white is being dragged by 3d4 legionaries to a tomb. It is a priestess of Vesta who has been found guilty of the greatest offence. Will the party intervene in order to prevent her from becoming buried alive and thereby earn the ire of the Roman state? After all, she only has a 50% chance of actually having violated her chastity.

DCC RPG Conversion notes
Save vs. death= make a Will save DC 10
Charisma= Personality (or Comeliness: described in Volume I)