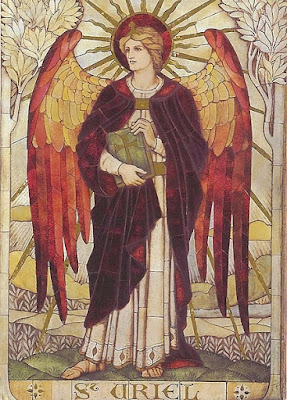 As the edits for Volume II and its revised pdf are wrapped up over the next few weeks, we begin a special series on spirits. Unlike divinities and fell lords, spirits are localized and much less potent, though they can still cause adventurers quite the memorable experience. And, as mentioned in Volume II, though they can usually be turned, they can rarely be harmed by sword or spell. Unusual methods may be required in order for them to be overcome.

Here are ancestral, angelic, and demonic spirit encounters, for those beings who espouse tradition, morality, and immorality respectively.


Ancestral Spirits
Roll 1d4
1. A random item in one party member’s possession is an heirloom indeed. Possessed by the spirit of a dwarven ancestor, it grants its bearer a +1 to all rolls made against (roll 1d4): [1] orcs, [2] elves, [3] goblins, [4] trees. Of course, he or she will hate all four with a passion even if the heirloom doesn’t grant a bonus against them.

2. With a strange air about him, a man approaches the party, asking them to set some issue right. Though he is actually an ancestral spirit, the cause he requests is fully material (roll 1d4): [1] set a certain descendant of his back on the right path, [2] harm a rival clan, [3] recover a family heirloom, [4] restore an old custom in town.

3. A small tomb is discovered. Apart from the 1d6 x 100 gold pieces in valuables it contains, its potent spirit will attempt to possess a random interloper (save vs. death negates). Oddly enough, it won’t then necessarily try to slay the party, but will instead seek to destroy an ancient foe and any of its representatives that it encounters (roll 1d6): [1] dwarves, [2] orcs, [3] goddess-followers, [4] shoe-wearers (sandals or boots are acceptable, but certainly not slippers), [5] the shirtless, [6] those men who refuse to wear proper mustaches. Still, if any in the party does match one of these, then it will end up trying to kill them after all.

4. Everyone within 60’ must save vs. spell or immediately revert to the way of their early ancestors, eschewing fire, metal, clothing, and other new fads. Such a state can only be relieved by quieting the spirit at work here (roll 1d4): [1] appeasing it with a proper offering of animal fat poured upon the ground, [2] getting at least 1d4 others to give up such new fads for 1d4 hours too, [3] assisting the spirit's nearby kin who are quite primitive too, [4] finding its burial plot and threatening to defile its remains.


Angelic Spirits
Roll 1d4
1. How moral have you been? If so, then a mighty angelic spirit arrives to grant each party member a +1 to +3 to all rolls (depending on how much) for the rest of the day. If not, then it will punish them with a -1 to -3 for that time- even if just one has been immoral- unless they all agree to smite some other evil instead.

2. It is rumored that those who pray hard enough before a bright fire will encounter an angel clad in white. He grants a one-time prophecy to all who are pure of heart, hoping to guide them onto a righteous path even if they aren’t already on one.

3. A man in this area has been healed. Others have tried too, but with mixed results (only experiencing such healing 50% of the time) even if they've lived a goodly life. The secret is that they must also be (roll 1d4): [1] peaceful, [2] artistic, [3] engaged in good works, [4] all three. Doing so brings the chances up to 75%.

4. A shadow falls upon this 1/4 mile area, but it is also strangely comforting. Of course, those who have been wicked will instead be revealed and smitten for 4d6 damage, not find it comforting at all.


Demonic Spirits
Roll 1d4
1. An unlucky party member begins to experience terrible nightmares. He is unable to sleep well, suffering a -1d6 to all rolls until the demon who has taken up residence inside him is exorcised

2. In a bizarre manner, the next foe the party encounters is unusually vicious and powerful, gaining a +3 bonus to all rolls made to do harm. The clue as to the cause is that (roll 1d6): [1] its eyes are completely black, [2] its head twists around, [3] it engages in unnecessary profanity, [4] it has horns or wings and a red or black hide, [5] it performs music backwards, [6] all five. Once slain, things get even worse, for the demonic spirit within the foe gets released and tries to possess one in the party (save vs. death negates)!

3. Something seems off to all within 60' who fail to save vs. spell (roll 1d6 for each one affected): [1] a weird pain or itching, [2] a rotten smell, [3] disturbing sounds, [4] something moves and shifts just in the corner of their vision, [5] painful flatulence, [6] dour looks from everyone they see. Each lasts for 1d6 turns, though engaging in a cruel act ends it immediately, signifying that some sort of demonic force is at work.

4. Using supernatural powers, a strange, diabolic woman aids the party during their next time of need. All she requests in return is that they (roll 1d6): [1] perform just one bloody sacrifice to some fell lord, [2] lie, cheat, or steal at their next opportunity, [3] pay her proper homage, though she will soon insist on such homage becoming devil worship, [4] sign a confusing contract, [5] give her their souls, [6] change so that she can still love them.