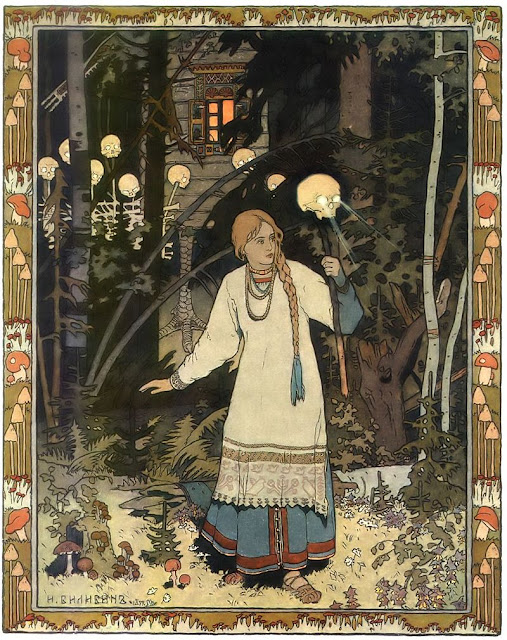 Sinister magics bless those deserving and harm those who are not. Roll 1d12.

1.  Curse of Baba Yaga: What will be given for this? The koldunia experiences a divine test (detailed next week) unless she can touch someone else within 1d3 rounds first, making them experience it instead. In the latter case, a save vs. death negates, but doing so will also negate the spell.

2. Aiiiii! I seeee! An ecstatic trance comes over the koldunia, causing her to be ridden by Baba Yaga while casting the spell and for the next 1d3 rounds afterwards. And though most won't actually see the Witch Goddess during this time (only a base 10% chance), the koldunia will move madly in a random direction each round, shrieking to all that she can!

3. Oh, it's you... As long as the spell is meant to help one unworthy or to harm one worthy, then it only works at 1/2 its normal potency. If unknown whether a target is worthy or not, then there is a 50% chance of it being so.

4. Herbs, my pretty: Some parts of especially unpleasant plants, animals, or even other beings are needed for the magic to work. Koldunias typically have such things on their person, but non-koldunias typically find such things to be quite disturbing and will react badly when seeing them (a base 66% chance).

5. I bite: Appearing to take on iron teeth (unless she has them already), the koldunia must chomp into the closest person or object within a random direction. Such an act allows the spell to commence and automatically causes 1d4 damage to the one so bitten- let's hope that it has good chicken legs!

6-8. Witchcraft! A random Witch Side-Effect occurs- see Volume II (listed under Mercury, p.20) to determine which it is.

9. Ivan's Three: The spell's target must make a choice from three things, such as huts, brooms, or skulls. If successful (a base 1 in 3 chance), then he either gains triple the spell's usual benefit (if it was meant to help him) or no adverse effect at all (if it was meant to harm him). If not, then Baba Yaga simply bites him for 3d6 damage instead.

10. Spoil! Though likely to rile any goodly folk who see such a dark deed, the spell works at twice its normal effect, range, or duration if meant to harm someone else. If not, then it only works at 1/2 its normal power, causing goodly folk to simply grumble.

11. Fire of Vasilisia: The magic can be cast for double its usual effect, range, or duration if the koldunia holds up a flame; triple for all three if it is set within a skull. Still, all non-followers of Baba Yaga who witness such an act must save vs. death or take 2d6 fire damage (3d6 if seeing the flaming skull), possibly being burned to ash as well.

12. Blessing of Baba Yaga: The spell works for thrice its normal effect, range, or duration, and it is not expended for the day. Still, the koldunia must save vs. death or experience a divine test too (or give it to someone else as in #1 above)- Baba Yaga won't give such blessings for free!


DCC RPG Conversion notes:
Save vs. death = Will save DC 10
Spell not expended for the day= koldunia gains a +2 bonus to the spell check