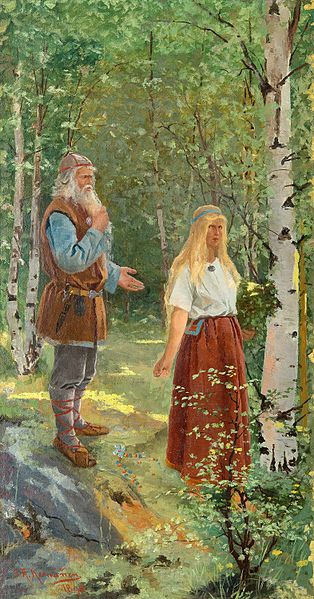 Creation starts with a word, even if it doesn't always work as planned. Roll 1d12.

1. Seeking Aino: The spell may do the opposite of what's intended. Unless the cleric saves vs. death, a healing spell will harm, a harming spell will heal, or the like. Perhaps it's time re-tune one's kantele?

2. Laulu Taistelu: Only the best will win. The cleric must engage in a song duel with the spell's target (via an opposed Charisma check). If he doesn't win, then the target can choose to ignore the spell.

3. Vaults of Ilmatar: Some say Vainamoinen came from the sky and sea, so the cleric must be in sight of one or both when casting the spell. If not, then it will only be at half its usual strength, though even seeing a duck egg will suffice.

4. Ask the Haltja: A Charisma check is required here, imploring the local spirits to make the magic happen. Without it, the cleric will need to leave them a small offering instead.

5. Luominen: All within 60' experience Vainamoinen's way, gaining a +3 to their spell rolls for the next 2d6 rounds as creation unfolds.

6-8. No Side Effect: The spell works normally this time, though it still must be sung, of course.

9. Synty: Such power in the origin-words of things. The cleric may attempt to discern that of the magic's target (via an INT check), granting him a +2 bonus to any spell rolls made in regard to them from now on.

10. Kalevala Rhyme: 'Vainamoinen, old and steadfast, answered in the words which follow'. If his cleric does the same, stating what the spell will do, in trochaic tetrameter (naturally), then the magic's effect, range, or duration can be doubled.

11-12. Bard's Blessing: The magic is sung for twice its normal effect, range, or duration, as well as it not being expended that day. What is more, if the cleric wins a song duel with the spell's target (per #2 above), then he may also attempt to learn the target's synty (per #9 above).


DCC RPG Conversion notes:
Save vs. death = make a Will save DC 10
Charisma check = Fellowship check (DC 15)
Spell not being expended that day = gains a +2 bonus to its spell check


Next week: Clerics of Vainamoinen, Part III!
Posted by Dan Osarchuk at 4:17 PM