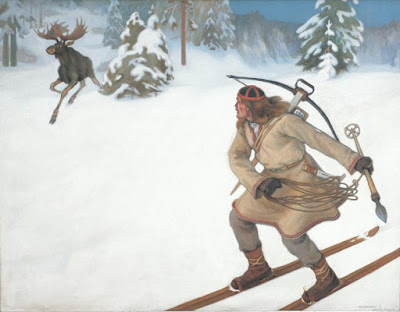 Magical Side-Effects
Such adventures to be had, whether on the hunt, by war, or in song. Roll 1d12.
1. Brash: Reckless, the magic must be cast in Lemminkainen's way, doing such dangerous and upstart things that most mothers would not approve of. If not, then the spell will have the opposite intended effect, being quite brash after all.

2-3. Minstrelsy: Whether it be entreating with song or haranguing would-be mockers that one would defy, a Charisma check is needed now. Otherwise, the spell only works at half strength.

4-5. On the Hunt: One must take what one quests for! If the casting would help the fighter-wizard gain something, whether another's loyalty or some tangible object, then it will work normally.  If not, then roll on Mielikki's Magical Side-Effects table, since Lemminkainen was known to follow her on his own hunts.

6-8. No Side Effect: The spell works normally this time, though it still must be spoken or sung.

9-10. Fine Item: If holding a fitting weapon, garment, or tool that is well-made to cast the spell, then its effect, range, or duration can be doubled. If not, then the spell just works normally and he should get such an item soon!
11-12. Oath-Made: The magic can be cast for twice its normal effect, range, or duration, but only if the fighter-wizard is currently abiding by some promise or, even better, breaking one since the other reneged on the deal first.