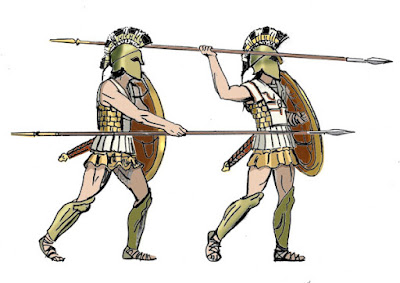 Heavy infantry, hoplites can serve various divinities and cults well. Though mostly found amongst the Greeks, early Italics and Carthaginians have them too. They are armed with aspis (hoplon) shield, dory spear, and xiphos or kopis short sword, as well as often being protected by classic bronze greaves, breastplate or linothorax, and helm. When so equipped, they can gain a +1 bonus per odd level (or HD) that can be added each round either to hit, damage, or improve their AC, allowing them to fight more precisely, viciously, or with more defense (as described in Volume I).

Divinity/Cult (select or roll d12)
Hoplites can gain additional bonuses based on which divinity they serve. In return, they suffer a -2 to all rolls when fighting on uneven terrain because their armor can be so bulky.

1-3. Zeus: +2 to hit those who are on lower ground or are of lower station.
4. Apollo: +2 AC bonus vs. archers or when in full sunlight.
5-6. Athena: +2 AC bonus when defending an area or when using wise tactics.
7-8. Ares (link): +2 damage when attacking an area or when fighting those in lighter armor.
9. Poseidon: +2 to hit horsemen or when near the sea.
10. Hades: +2 to hit when indoors or underground.
11. Hephaestus: +2 AC due to especially heavy armor, but also a -5' speed penalty.
12. Early Itallic or Carthaginian Equivalent Deity: +2 AC bonus when near one's city or when near the sea.

Note: Artemis, Dionysus, Hera, and Pan have their own unique fighter-types, such as peltasts and amazons, while Zeus is served by myrmidons and hoplites- all detailed in a few weeks.

City-State/Subgroup (select or roll d8)
For further specification, hoplites can be from a certain city-state or racial subgroup, using whatever equivalent name the Referee has in his campaign if needed. See Volume II for more details. City patron deities are included as well, though individuals there may certainly have other patron gods or goddesses.

1. Athens/ Ionian (Athena): +2 to rolls involving philosophy, -2 to morale in protracted land battles
2. Corinth  (Poseidon & Aphrodite): always has access to heavy hoplite armor, but -2 to saves vs. magic
3. Crete/Minoan (Potnia & Poseidon): +2 to rolls involving leaping (hopping light), but will only use light hoplite armor
4-5. Sparta/ Dorian (Artemis & Apollo): +2 to morale in protracted land battles, -2 to rolls involving philosophy
6. Thebes/ Aeolian (Dionysus & Apollo): +2 to saves vs. magic, but will only use light hoplite helms
7. Other Greek: per Referee
8. Early Itallic or Carthaginian: or roll 1d6 again to determine due to Carthage's use of mercenaries

Guards for Clerics (select or roll d12)
Along with being an option for fighter player-characters, hoplites can also serve as temple guardians or even bodyguards for most Greek and other Mediterranean clerics, priests, and priestesses. Not only associated with the more martial cults, they are also recruited by those who follow peaceful divinities like Aphrodite (link) and Hestia, since those they encounter won't always be (mostly) peaceful too. Hoplites are rarely found protecting witches or mystics though: the former being too sinister and the latter being too esoteric.

To determine whom a hoplite might be guarding, consult the table below. Otherwise, clerics, priests, and priestesses of the deities listed can gain hoplite protectors if their temple (and the Referee) sees fit.