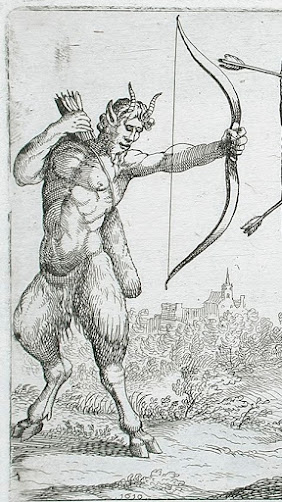 Wild men, often with horns and the lower bodies of horses or goats, satyrs are notorious for being lascivious and gregarious. Whether playing their pipes, seducing maids, or causing a tussle, there is much to be had in their revelry. And unlike many other Greek monsters, satyrs can be fey, nature spirit, or mortal beings. Most follow Pan of course, though others call Aphrodite, Dionysus, or the Roman Faunus patron instead.

Disposition
Along with an additional base 33% chance of being drunk, a 25% chance of dancing and/or making music, and a -4 penalty to resist the enchantments of females, satyrs generally follow a certain disposition range. Select or roll 1d12 below, modified by satyr type.
2 or less. Calm & Instructive (& Somber)
3-4. Calm & Lascivious
5-6. Lascivious Only
7-8. Gregarious & Lascivious (50% chance of also wishing to engage in a play)
9-10. Gregarious & Panicking
11 or more. Aggressive, Lascivious, & Panicking

Weapons (d8)
Usually more for making love and making merry, satyrs will make war if need be, though they disdain the use of armor or any clothing for that matter.
1-2. Bow
3-4. Spear
5-6. Dagger
7-8. None (just horns if available)


Special Abilities (base 10% chance for each)
- Fey: may turn invisible and use dimension door up to their HD level times per day, but takes 1d6 damage per round when touching iron and must abide by other faerie restrictions.
- Larger horns: +1 to disposition, horned damage die is now d8.
- Magic Pipes: possesses an enchanted syrinx that allows the satyr to cast Charm, Sleep, or Fear on any within 60'. Save vs. spell negates, and those who save against a particular satyr's pipes once are forevermore immune.
- Marsyas-ilk: -2 to Disposition, but has special animosity with followers of Apollo.
- Nature Spirit: is ethereal by default, but may take physical form for up to 1 round per HD per hour, and yet cannot enter any structures (except ruins) in any case.
- Priapan: +4 to lovemaking rolls, but -5' speed, due to being perpetually ithyphallic.
- She-satyr: the satyr is female, though may still have some male satyr parts (base 33% chance), in any case, goat- or horse-like legs often begin below the knees, rather than waist-down as is the case for male satyrs (base 65% chance).

Summoning Satyrs
Clerics (and other spellcasters) of divinities and cults listed above can add the spell Summon Satyr to their spell list. Treat it as Summon Monster, except that only 1d3 satyrs may be summoned at a time, up once per day, their HD (usually 2) determining the appropriate Summon Monster spell's level. It takes 1d6 rounds for the satyr to arrive and then the spell's duration begins- when the cleric can actually give commands. Once the duration ends, the satyr will act according to its disposition (if it still lives, either remaining or leaving the area) unless the cleric successfully casts another Summon Satyr spell to control it once more.

In any case, providing the satyr with an offering (or sacrifice) that fits its disposition can increase the spell's duration by 50 to 100% (per Referee), as a promised reward given after the commanded deed is done. Almost always, providing an at least reasonably attractive woman will coax it to stay around longer. 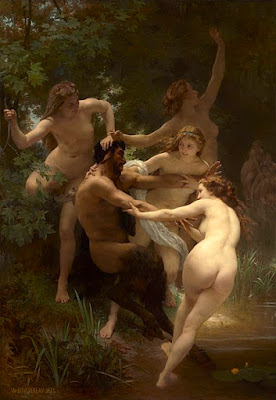