Far from being 'monsters', nymphs are more than human and can certainly be dangerous. What else can one expect from beings that look like breathtakingly beautiful women who are only too happy to pluck the heartstrings of mortal men? Whether fey, nature spirit, or just quasi-divine, nearly all of the Gods and their followers interact with nymphs since they personify the beauty and fertility of Nature, being minor goddesses themselves. They are presented here with plenty of pictures.

Type
Though always appearing as beautiful women, the types of nymph are many. All are immune to harm by natural forces, creatures, or other hazards, allowing them to lounge happily nude wherever they are found. What is more, depending on their type, they will have the ability to meld with their particular type of area, to always know what's occurring at their home area, and to summon beings native to their type of area to their aid. For example, a dryad can meld with trees, knows what's going on at her own home tree, and can summon forest beings to her aid, while a naiad can meld with freshwater, knows what's occurring at her own pond or lake, and can summon freshwater beings to her aid.

Disposition
Nearly always lascivious, their reactions to mortal men can range from helpful to deadly. In addition to influence from their patron deity (determined via their type, above) nymphs can serve as either a (roll d6):
1. Muse: instructive, will help and guide, even providing a +1d6 bonus to certain rolls
2. Friendly Fey: playful, will enjoy and savor
3. Spirit of Place: majestic, will bond in the way of her domain
4. Wild: will follow animalistic, carnal impulses
5. Cruel Fey: harsh, will play twisted games
6. Siren: alluring, may entrap forever, either to remain with her or die in the process, though he may die happy nonetheless

Special Abilities
Along with usually being immune to normal weapons, being able to cast charm on mortal men at will, and their abilities described above, nymphs have a base 15% chance of having the following additional abilities (roll for each one).
- Blinding Beauty: mortal men who first view the nymph nude must save vs. death or go blind.
- Enduring Kiss: not only does she fill the ones she touches her mouth to with erotic joy, but also the ability to survive in the environment she dwells in for as long as she wishes.
- Faerie: may turn invisible and use dimension door up to her  HD level times per day, but she also takes 1d6 damage per round when touching iron and must abide by other faerie restrictions.
- Fairest: can take on the forms that mortal men hold most dear, becoming perfectly beautiful and even impersonating specific mortal woman if she so wishes. Only those of great will or intellect can resist her charms then.
- Hama: cannot leave her natural area, but automatically gains 1d4 additional special abilities on this list.
- Multirolled type: is native to two types of natural places. Roll again on the type table above, so she could be both a naiad and a limoniad, etc.
- Nature Spirit: is ethereal by default, but may take physical form for up to 1 round per HD per hour, and yet cannot enter any structures (except ruins) in any case.
- Oracle: can gain glimpses into the future, either through herself and/or the natural area in which she dwells.
- Priestess: has 1d12 levels, following a divinity that matches her type (see above).
- Slaying Beauty: mortal men who first view the nymph nude must save vs. death or die.
- Sweet Nectar: partaking of the nymph's pleasant secretions is the same as drinking a potion of Cure Disease, Healing, Restoration, or even Sleep- she decides which.

Summoning Nymphs
Clerics (and other spellcasters) of divinities and cults listed above can add the spell Summon Nymph to their spell list. Treat it as Summon Monster, except that only 1d3 nymphs may be summoned at a time, up once per day, their HD (usually 3) determining the appropriate Summon Monster spell's level. It takes 1d6 rounds for the nymph(s) to arrive and then the spell's duration begins- when the cleric can actually give commands. Once the duration ends, the nymph will act according to her disposition (either remaining or leaving the area) unless the cleric successfully casts another Summon Nymph spell to control her once more.

In any case, providing the nymphs with an offering (or sacrifice) that fits her disposition can increase the spell's duration by 50 to 100% (per Referee), as a promised reward given after the commanded deed is done. Almost always, assisting her natural area will coax her to stay around longer.
Next week: Gigantes! 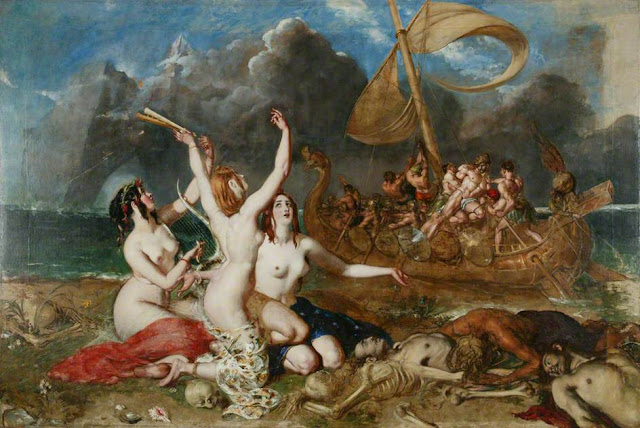