Druids of Johnny Applewheeze, Part I 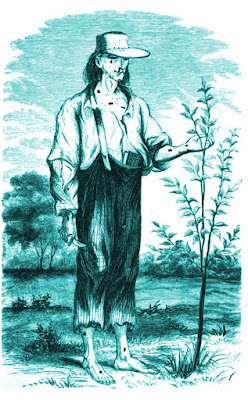 1. Appleodema: Johnny calls for a random someone within 15’ to be slain via a serious allergic reaction. Unless they save vs. poison, they will immediately experience a swollen, apple-red death. If no one else is around, it is the druid who is chosen.

2. How Do You Like Them Apples? The druid must use at least a handful of an allergen from the list below for the spell to work, throwing it in the target’s face, hopefully causing a terrible reaction to boot!

3. And Now I Plant My Seed in You: Along with any other spell effects, the target must save vs. poison or gain a random allergy as Johnny’s foul seed tries to find fertile ground within them.

4. Cornucopia of Pain: The immediate, 1d6 x 5’ area becomes full of 1d3 types of allergen. For those who are allergic, much itching, sneezing, and wheezing will abound until they leave.

5-8. No Side-Effect: The spell works normally this time, though Johnny looks forward to planting future side-effects.

9. Poison is in Everything: The druid finds that out too, gaining a 50% bonus to the spell’s effect, range, or duration, but also suffering a -1d4 to all rolls for the next 1d4 rounds afterwards, hoping for the remedy.

10. Apple Atopy: If he has ever touched his target with an apple, then the druid can increase the spell’s effect, range, or duration by 50%. Of course, the target must also save vs. poison or have an immediate reaction, even if he or she isn’t normally prone to one.

11. Keep The Doctors Away!  As long as there are no actual healers within 60’, the magic’s effect, range, or duration is doubled. It’s good that the druid keeps an apple on hand daily to make sure doctors aren’t.

12. Poison Appleseeds: To better keep humans in check- via great suffering- the spell happens for double its normal effect, range, or duration, as well as it not being expended that day. In addition, if it would cause harm to a target with any sort of allergy, then they must save vs. poison or immediately die of appleodema.

Generating Allergies
For most humans, roll 1d10 -7 times on the list below to determine how many they have (if any) and then roll for what they are. Results of zero or less indicate that the individual is currently allergy-free.

For humans that have been repeatedly exposed to the magic of Johnny Applewheeze though, roll 1d10 -4 times.

For demi-humans, humanoids, and domesticated animals, roll only 1d10 -9 times, since they aren’t particularly hated by Johnny. All others are generally free of allergies, at least when it comes to the ones on the following list.

Reaction: -1d12 to all rolls for 1d6 (then roll 1d20): [1-10] rounds, [11-15] minutes, [16-19] hours, [20] days. Note that rolling the same number on the d12 and d20 indicates a severe reaction (appleodema) in which case the individual must immediately save vs. poison or die. No matter the type of reaction, the symptoms can be negated with disease-curing magic, but the allergy itself is certainly a curse.

DCC RPG Conversion notes:
Save vs. poison= make a Fortitude save DC 15
Spell not expended that day= spell gains a +2 to its spell check