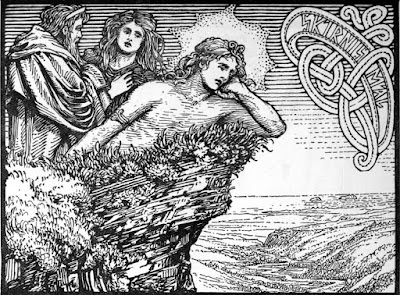 Another masterpiece of Collingwood, drawn back during the Freyr revival of 1908. Oh, those were the days!
See: even Fertility Gods can get lovesick, but not for long!

Divine Tests
1-3. To be fecund and prosperous, one needs to rest. The cleric must sleep for at least 1d3 hours. He will likely dream of fertile fields and finding an attractive giant wife.

4-7. Fruitful Acts. The priest of Freyr experiences a reduction in spells available (50% chance for each one) for the rest of the day. Roll 1d6 for each spell lost to determine what act the priest needs to engage in order to regain it before then: [1] work a new field, [2] lay with a new maiden, [3] assist some elves or Swedes, [4] gain 1d20 gold pieces, [5] view one’s surroundings from a high place, or [6] find either a burial mound or a wild boar.

8-9. Freyr declares that no maid must weep. The cleric is compelled to immediately find a woman to satisfy, a process taking a total of 1d20 hours, and a successful Charisma, Dexterity, and Constitution check once she is found. During this time, he can only use his spells for the ends of courtship and consummation, though he will luckily remain ithyphallic to increase his chances of success. Even followers of Tyr might agree that such is a noble task, though unless the cleric is a Vanir, his sister will not do.

10-11. All this fertility and maiden-sowing ultimately leads to family, or at least, it should. As Yngvi, Freyr founded lineages and so must the priest. He must now father a child, or if he already has children, then he can simply spend 1d6 hours with them instead. If away from both his children and any suitable, potential mates, then he must acquire 5d20 gold pieces instead. Otherwise, he will lose access to all his spells for the next 36 hours. One must earn the honor of being called a ‘Lord’, just like Freyr.

12-13. Though it might not be quite as big as Freyr’s, the priest’s ‘sword’ becomes much larger, granting a +2 bonus to all rolls relating to fertility and well-being, but also a -5’ speed penalty and -1 Dexterity penalty, due to it also being more cumbersome. What is more, every time the priest experiences this result, both the bonuses and penalties increase again by the same amount.

14-15. Froblot. Not everything about Freyr is smiles and sunshine. Sometimes a living sacrifice is needed for fertility to work, and one is needed now, especially a dark-colored one. Until the deed is done, the cleric cannot use any of his spells.

16-17. My Beli’s rumbling... A hill giant arrives to fight the priest. And though his allies might help, the priest can only use an antler to attack in this fight (with a -1 ‘to-hit’ rolls and does only 1d3 base damage). The giant remains for either 3d6 combat rounds or until either it or the priest has been slain.

18+ Someone has to go and woo Gerdr! The cleric must journey to retrieve her from Jotunheim. Such a journey takes 1 day per Fertile Ways result over 17 and causes 1d20 damage per day, due to outraged giant attacks, large hazards, and such, if the quest is not roleplayed. Alternatively, the cleric could send an emissary to go in his stead, like Freyr did with Skirnir, though he must then give him his sword and steed (if any) and can also cast no spells during that time. In either case, if the cleric or emissary survives, then the cleric can reuse his spells, sword, and steed again, and there is a 20% chance (+15% per Charisma bonus the cleric has) of returning with an attractive giant wife, one with amazing glittering arms.