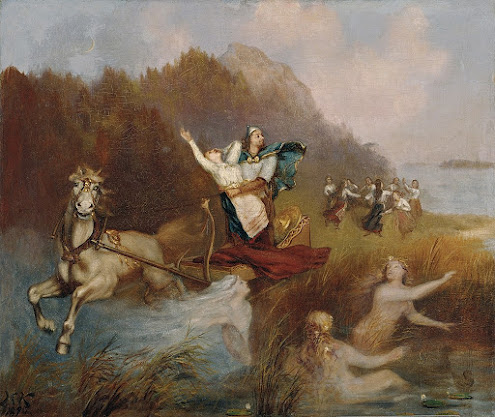 Spells (Lemminkainen)
To be brash, one must use clever magic, though fighting, tracking, and singing may be required too.
1st Level: Create Water (as ice rain), Delay Poison, Protection from Evil, Remove Fear (reversible), Taunt Person (reversed Charm Person*)

2nd Level: Bless, Silence 15' Radius, Burning Eyes (as Burning Hands*, but shoots from the fighter-wizard's eyeballs instead), Fire Arrows (as Magic Missile*, but are on fire), Sleep*

4th Level: Create Food and Water, Fire Sword (causes the fighter-wizard's sword to be engulfed in flame, allowing it to cause +1d6 damage per round to those it hits for 1 round per caster level; can also be used to cut through walls of fire). Summon Sylvan Beings (D), Haste* (over snow only), Ice Storm*

Ranger-Wizards & Wizards-Bards
For those looking for more specialized followers of Lemminkainen, there can be ranger-wizards or bard-wizards too.
Ranger-Wizards: fight as clerics and have the tracking abilities of the ranger. They still learn only one spell per level, can only cast 1/2 the cleric's amount of spells per day, and cannot turn- the same restrictions as fighter-wizards.
Wizard-Bards: use the rules for bards in Volume II, but substitute Lemminkainen spells instead.
Next week: Fighter-Wizards of Lemminkainen, Part V!